Why CIO's Need to Change Their Role

Last night I got to have dinner with a group of 20 CIO’s. My role was to help bring the CEO perspective to them on what they do and how they do it.

I based my CEO perspective on several inputs: my own experience dealing with IT departments; input from CEO’s, CIO’s and Consultants on the Boardroom Metrics team; and, scanning some easily accessible press to see what other CEO’s are saying.

Going-in, my theme was this – there’s a reason so many CIO’s report to the CFO – CIO’s aren’t helping the CEO with his/her priorities. Writing applications and protecting the Company jewels is important grunt work. But it’s just grunt work. And it won’t get you to the Boardroom table.

Sadly, what I heard last night reinforced the theme. It’s not what I was hoping for.

Somehow, too many CIO’s have become content being relegated to cost-center, execution-leader status. They fail to see how what they do can be important strategically. Furthermore, they see the tactical issues they face as being somehow unique – that the execution details in IT somehow make them different from what every other department in the Company has to face.

First, every department faces execution hurdles – overcoming them is simply part of the job. Get over it.

Second, the reason other departments like Marketing and Sales so easily access the CEO’s share of mind is because they’re working on what the CEO cares about – building the business and making money.

Third, the IT group could also easily be at the table if they 1) learn the business and 2) start applying what they know (IT stuff) to what the CEO cares about.

There was some great discussion last night on how CIO’s and IT got to where they at. And not at.

Someone commented that the worst mistake that’s been made is defining internal groups as ‘the customer’ and accepting the role of ‘supplier’ – including signing up for internal service level agreements and other bits of structure that keep the IT group fully at bay from the rest of the organization.

I’m not sure if that’s true - but it sounds logical and dangerous.

In terms of changing and working closer with the CEO, there is a common theme that everyone seems to buy off on: CIO’s need to LEARN THE BUSINESS.

Understanding the business is critical if CIO’s are going to help the CEO and the Company achieve their priorities.

However, that won’t happen until a fundamental mind set shift occurs. CIO’s can no longer be content in their role as suppliers, followers and executers.

What CEO’s are looking for is corporate leaders.
at November 21, 2012

Okay. I know it’s a settings thing. Sometime, a long, long time ago – probably when leadership was being invented – I must have indicat... 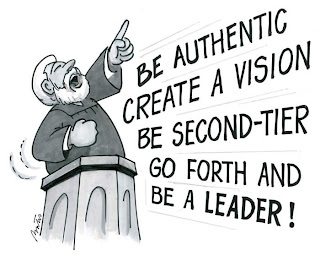